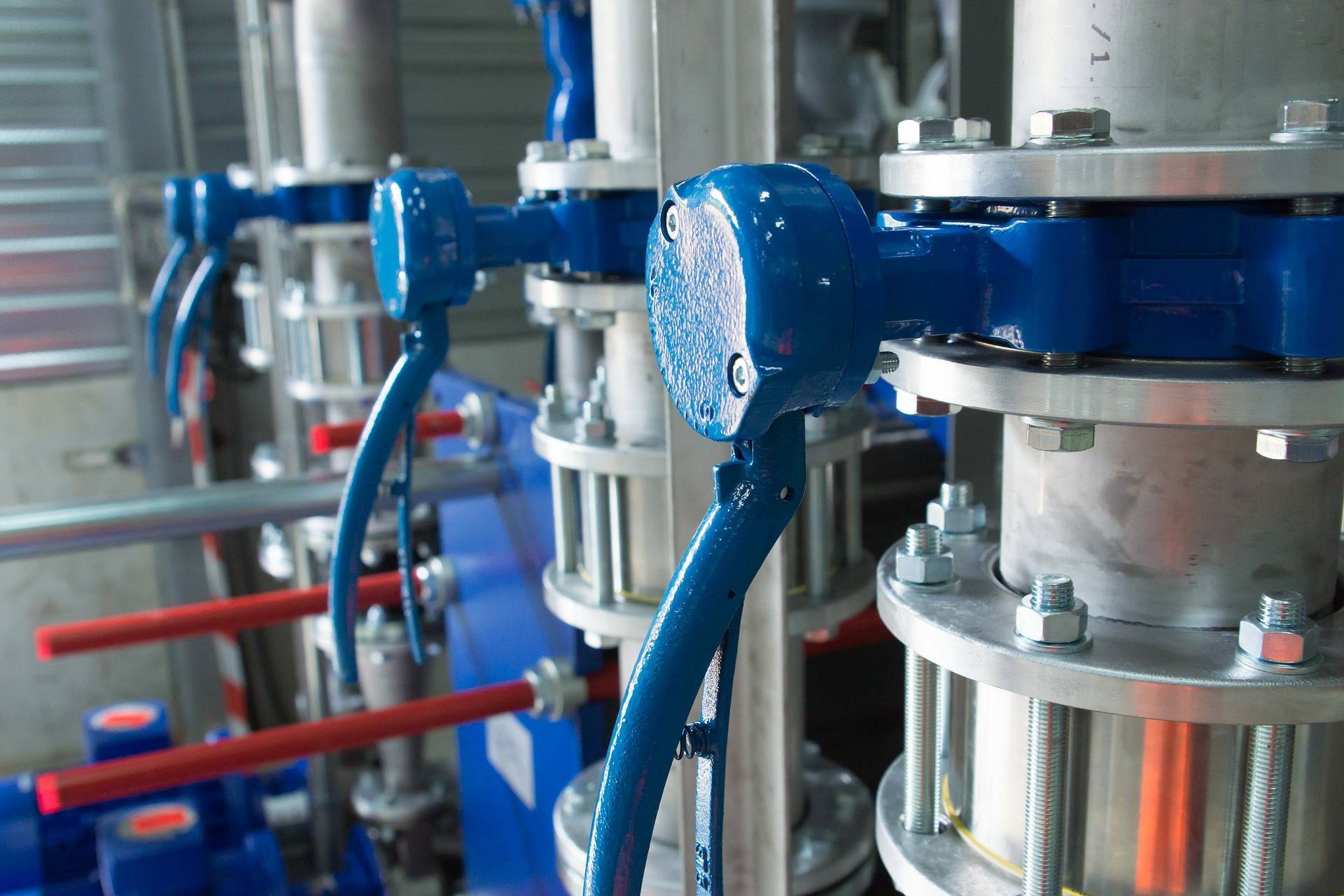 Desalination is the process of removing minerals, predominantly salt, from seawater for human consumption or the irrigation of crops. Although it is a relatively energy intensive process, and therefore more costly than freshwater extracted from rivers or groundwater, it is required in many regions of the world where freshwater is scarce.

There are currently around 19,000 desalination plants in operation around the world, supplying more than 300 million people with their needs. However, this number is expected to increase significantly in response to population growth and development.

There are a large number of different desalination processes in operation, but the majority fall under two general categories.

Here, the water is purified by evaporating it from the seawater. The vapour given off is condensed on cooling leaving the impurities behind. Repeating this fundamental process a number of times results in increasingly pure water. The two most common forms of thermal desalination in operation are:

This is when the product of the heated water is reheated multiple times, each time at a lower pressure than the last. Ordinarily, this would be a very energy-intensive process, but that drawback can be overcome by constructing such plants adjacent to conventional power plants.

By using the waste process heat – which is high-volume, low temperature and otherwise difficult to exploit – it is possible to operate such plants with far less energy than alternative processes such as reverse osmosis. Multistage flash distillation accounts for the greatest volume of desalinated water produced currently, due to the number of very large plants supplying locations in the Middle East.

The main disadvantages of multistage flash distillation are that it requires more intake of salt water than reverse osmosis and the upfront and maintenance costs are considerably high.

This is a simple process similar to multistage flash distillation. The salt water solution is heated and the pure water that is produced flows into the next chamber. The heat energy that it carries is used to boil it again, producing more vapour.

Again, there are many variants on the basic process, but reverse osmosis dominates in terms of the number of plants in operation. Here, pressure is used to push the water solution through a membrane, with the membrane preventing the larger solutes (the salt) to pass through.

Reverse osmosis is generally considered to be the least energy consuming of all the large-scale processes. However, there are operational challenges: membranes are prone to gather bacteria and block-up; membranes deteriorate when chlorine is used to treat the bacteria and the water quality is not deemed as pure as thermal desalination. It is a low-temperature, high-pressure process and part of its popularity is that it can be scaled from small standalone units up to industrial scale. The process continues to be refined, and the most modern membranes can operate at pressures below 600psi to drive the water through the membrane whilst still removing the salt and other solutes.

Desalination processes handle waters of varying compositions, either as a feature of their location (seawater, brackish water) or the process employed (concentrated seawater, distillate). The input pH is usually between pH 6.0-8.0, and the level of oxygenation and chloride ions will vary by location. The other main factor from a material selection perspective is the speed of fluid flow, and whether it encourages either erosion corrosion or cavitation corrosion.  These different challenges are considered further below.

Cavitation corrosion is strongly influenced by the design of a particular system, from pump design and location, through sizing of piping, all of which could create unstable or non-uniform flow and the risk of cavitation occurring.

Erosion corrosion is an acceleration in the rate of corrosion due to the relative motion of a corrosive fluid and a metal surface, due to the repeated removal and repair of the protective passive layer. This can occur, for instance, when sand is entrained into elements of the desalination system handling seawater.

Once initiated, the increased turbulence caused by pitting on the surface can result in rapidly increasing erosion rates. Other factors that can aggravate the phenomenon include damage, poor workmanship or poor design that disrupts the water flow, leading to turbulence and high flow velocities, exacerbating erosion corrosion.

This kind of fatigue is only really a concern in components that are subject to high levels of repeated cycling   i.e. shafts found in pumps. Such shafts usually have features such as changes of section which concentrate fatigue stresses. Failures in service normally start at these points of stress concentration and can often be prevented by ensuring that generous fillet radii are provided at all changes of section.

Stainless steels are widely used shaft materials for seawater and brine pumps. For less corrosive conditions, where waters are low in chlorides, basic grades such as Alloy 304, Alloy 410 (12%Cr) and Alloy 430 (17%Cr) can be used. However, for seawater, where pitting and crevice corrosion can occur, the minimum grade commonly used is Alloy Type 316

In general, alloys with high strength and corrosion resistance have good corrosion fatigue strength. Therefore, duplex and super duplex stainless steels are attractive – particularly as they have much higher strength than the standard austenitic grades allowing their use at higher design stresses (reducing diameter and cost). Also, these alloys often have improved pitting and crevice corrosion resistance than Alloy 316.

Ferralium 255 – SD50 is widely used in all levels of pumps, with yield strengths of >85 ksi (586N/mm2) and a Pitting Resistance Equivalent number (PREN) >40. Alternatively, our high-performance Fermonic 50 austenitic stainless steel is also used for this application. It can be supplied in high-strength form, with a yield strength of >105ksi (725N/mm2) and a PREN of 34, but interestingly it retains excellent toughness at cryogenic temperatures for applications in demanding environments.

In chloride containing near neutral solutions, pitting and crevice corrosion will mostly influence the choice of materials. Pitting corrosion is a form of extremely localised corrosion leading to the creation of small holes. It occurs at weak points in protective passive surface layer, and requires both the presence of an aggressive species in the environment (chloride ions) and an oxidising potential (aerated water). Within the design and operation of large-scale desalination plants, it is extremely difficult to totally exclude oxygen from the water, as there will be a tendency for it to be drawn in through pumps, seals and flanges as well as be present in the incoming seawater.

Crevice corrosion often occurs under deposits and at joints of fabricated components. The crevice corrosion process of stainless steels in chloride-containing solutions can only occur if the water is aerated. In such regions it is possible for the water to have a different level of aeration than elsewhere, resulting in an increase in metallic ions (Cr3+, Fe3+) that attracts chloride ions (Cl-) to the crevice to maintain charge neutrality. The environment within the crevice becomes increasingly concentrated, forming hydrochloric acid and giving accelerated pitting corrosion.

Super duplex stainless steel grades achieve excellent resistance to pitting corrosion through their higher chromium content combined with molybdenum and nitrogen. However, unlike many of the austenitic stainless steels and nickel alloys, their nickel content is relatively low. Given the high cost (and volatility) of nickel prices, this can be an important cost advantage for their specification.

Another simple way to review the suitability of metals is the Critical Pitting temperature (CPT) which is a standardised laboratory test. Samples are exposed to an aggressive corrosive solution, with the CPT representing the temperature at which pitting corrosion is initiated. Due to the somewhat artificial conditions of the test compared with real-world production conditions it ranks metals susceptibility to pitting corrosion but not their actual performance. Sometimes clients will use the basic rule-of-thumb that metals should have a CPT > 40°C – something that is met by most metals that Langley Alloys presents to the market. 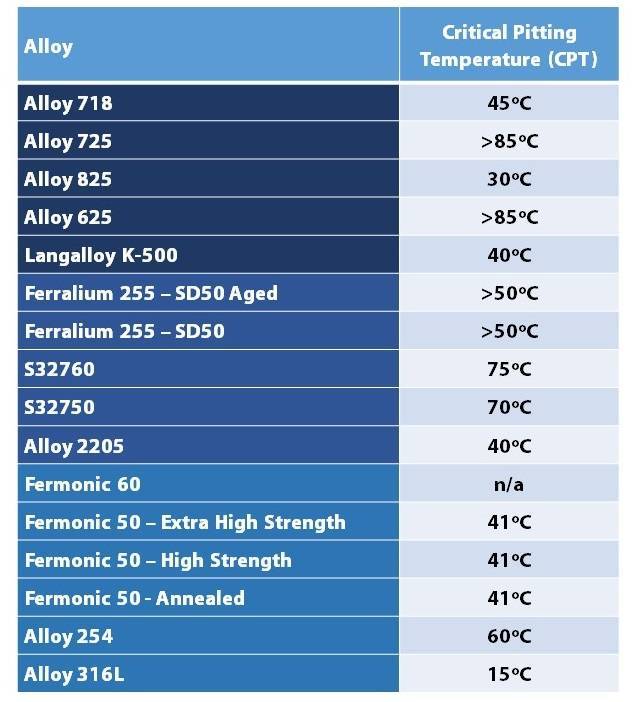 For a number of years Alloy 316L has been used. It a common and widely available grade with reasonable corrosion resistance to freshwater, but in aerated seawater its level of performance is no longer accepted. It is therefore limited to use in the ‘processed-side’ of the plant i.e. in fresh water.

A step-up in performance can be achieved by using Alloy 317L, which benefits from additions of molybdenum and higher chromium content to increase its resistance to pitting corrosion. Performance against seawater is acceptable if there is little oxygen present.

Alloy 2205, a duplex stainless steel, has been increasingly used in a number of process industries – particularly in pulp and paper mills. Duplex alloys have improved corrosion resistance, and as their strengths are typically twice that of standard austenitic stainless steels, they also have much superior resistance to stress corrosion cracking. This is important for applications where the material is exposed to tensile stress in a corrosive environment, particularly if temperatures are elevated. Therefore, it has been widely used for shells of large thermal desalination (multistage flash) plants which combine all these conditions. Despite this, it will not resist corrosion if exposed to highly aerated seawater.

The Next Step In Performance

Therefore, the next step-up in performance is achieved from either highly-alloyed austenitic stainless steels such as Alloy 254, or from super duplex stainless steels like Ferralium. With PREN values of 43 and >40 respectively, they have comparable resistance to pitting, crevice and stress corrosion cracking. As such, they are widely used in applications where the seawater is heavily aerated, up to operating temperatures of c. 35degC. Ferralium has been widely used in pumps and valves, in pipework and selected sections of the desalination plant. A general rule has been to use these higher corrosion resistant alloys on the ‘seawater-side’ of the plant.

In specific applications, greater corrosion resistance may be required. An example of this is in reverse osmosis desalination plants, where the backwash solution for cleaning membranes can be more acidic in nature.

Issues may also occur during plant stops and maintenance periods, as standing water may become significantly more aerated than during typical operation. An extension of this is the formation of bio-films and slime during shutdown periods, which then support crevice corrosion which persists long after re-start. Dosing the water, or chlorinating to inhibit the growth of bacteria may be helpful, but solutions should be compatible with the construction materials.

Copper alloys are widely used in applications such as heat exchangers, where their thermal conductivity is required. This is combined with good general corrosion resistance, but at limited flow rates (as discussed for erosion corrosion), and care must be taken to also avoid contaminants in the incoming water such as ammonia that can attack selected alloys.

Although nickel alloys will perform well in seawater applications, costs are prohibitive for widespread application.

We can offer air, sea and road freight shipping options, with choice of packaging, to deliver to customers globally.

Let us manage your total material requirements with call-off and consignment arrangements.

Up to 40 sizes per alloy available

For enquiries and product information, please call us on +1 800 878 3675 or email usa@langleyalloys.com to request a quote